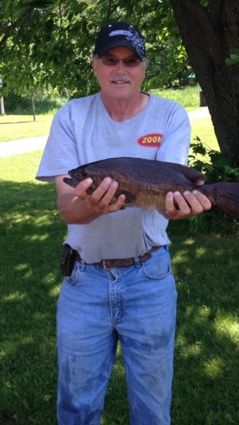 He retired in 2016 as the city of Ironwood's water plant operator at the pumphouse in Ironwood Township.

Throughout the years, he followed in his father's occupation as a self-employed logger and enjoyed "grinding gears" for Niemi Trucking of Kimball, Wis., and making wood to heat the family home. He also worked in lawn care when he lived in Illinois.

A 1974 graduate of J.E. Murphy High School in Hurley, he was a member of the Midgets' stellar varsity basketball team in his senior year.

An avid outdoorsman, his fishing and hunting exploits are legendary, including shooting the largest buck with a non-typical rack in the state of Michigan in 1998 - a deer nicknamed Reindeer - not far from his home in the Saxon Flowage area.

He hung two 14-pound-plus walleyes on the wall in the late 1990s, both caught in Lake Superior out of Black River Harbor. One mount was damaged, but survived the devastating fire at the Hurley K-12 school.

Jim and his friends enjoyed Lake Superior fishing on his boat, the Snake Pit. Anybody who wanted to spend time on the lake was invited. He and his son, Jacob, participated in the annual summer bass fishing tournament on the Gile Flowage, claiming the honor of past champs.

He spent deer hunting seasons with Jacob at Jerry Brauer's hunting camp in the Gurney-Mellen area, or with his Illinois buddy, Dominic O'Hara, in Missouri.

In recent years, he reconnected with his Idaho relatives in the Auger clan during elk hunting trips out West.

In his earlier years, he played softball for the Punks, bowled and golfed. He once scored an eagle (two shots) on the 410-yard, par four second hole at Eagle Bluff in Hurley, a remarkable feat that was only witnessed by the lady playing in front of him.

He coached the Penokee Range Little League All-Stars to the Michigan State Tournament in 2003 and 2005, cherishing the time he spent with his son, who pitched for the team.

Most of all, he will be remembered as a man with a quick wit, who enjoyed crossword puzzles, Bud Light, Barney Fife, "Shawshank Redemption" and old cheese.

Jim was always willing to help anyone and was devoted to his family members.

He is survived by his wife, Jenny; his children, Jacob, of Ironwood, and Kayla (Nick Thomas), of Green Bay, from a previous marriage to Cathy Ansami; his brothers, Marvin, of Ironwood, and Ralph, of Saxon, and a sister, Judy (Jim) Braatz, of Oconomowoc, Wis. Also surviving are Jenny's children, Dylan and Senja Nasi; a cherished aunt, Florence (Ansami) Auger, of Mullan, Idaho, and numerous cousins, nephews and nieces.

He enjoyed the company of pets and will be missed by the couple's two pooches, Timber and Saima, and Blackie, the cat.

Jim was preceded in death by his parents and numerous aunts and uncles.

A lunch will follow the services at the exhibition building at Gogebic County Fairgrounds in Ironwood, where Jim often volunteered to ice the snowmobile track under the supervision of his friend and fishing buddy, Tom Auvinen.

The family offers its sincere gratitude for the many expressions of kindness in the past two weeks that will never be forgotten and the professional assistance and comforting words provided by Jerald Rocco, of Lakeside Memorial Chapel of Wakefield.

Spring burial will be in the family plot at Lake View Cemetery at Saxon, less than a mile as the crow flies from Jim's home.