Ewen - A big reason why Bessemer's drought of district tournaments dates back to 2004 is because of Ewen-Trout Creek. It was no different for this group of Bessemer seniors.

Just because they came in with an under-.500 record didn't mean E-TC was any less formidable than normal.

So Bessemer fought to lift that district trophy Friday night.

First, Mazzon brought them back into the game after a first half dominated by E-TC and super freshman Jaden Borseth. Then senior Uriah Aili made the game-winning shot with 4.2 seconds left after E-TC had just come back to retake the lead and move into position to upset Bessemer for a district title.

Not this year. This year, the Speedboys defeated E-TC 51-50 in a hard-fought, well-played thrilling Division 4 District 97 final.

"Finally. By one point. Great shot by steel nerves Uriah. We sneak one out of here," Bessemer coach Richard Matrella said. "And finally break, I don't want to say the curse, but Brad runs a heck of a program."

It's been a heck of a season for Bessemer and this was a big goal fulfilled.

"We've been talking about it all year and last year," Aili said. "To actually get it is a dream come true."

Bessemer outscored E-TC 20-11 in the third quarter to take a 41-36 lead into the fourth and it stayed at that margin for much of the quarter until E-TC made one last run at it.

Borseth made two at the line to cut it to 49-47 with 1:36 left and Bessemer missed the front end of a 1-and-1. E-TC senior Eli Nordine buried a 3 with 17.9 seconds left to give the Panthers their first lead since shortly after halftime at 50-49.

The Panthers stopped Nick Trudgeon's drive to the basket. The kick out to Mazzon for 3 wasn't there. But Trudgeon got it to Aili, who hit it from about the free throw line to put Bessemer back on top 51-50 with 4.2 seconds left. Aili said it felt good off his hand.

"Oh my gosh, that was so amazing when it went in actually," Aili said.

Nordine ran to the same wing he made the 3 on, but the shot didn't go this time and the Speedboys were celebrating thanks to Aili's jumper that won't be forgotten in Bessemer anytime soon.

"It was a beautiful shot," Mazzon said. "He wasn't making very many shots the whole game. He had the chance to win the district and he finished."

"That's a mismatch in Trudgeon's favor bearing down on him with his weight and length," E-TC coach Brad Besonen said. "He kind of stonewalled him on that drive, turned him back. We had him in trouble on that baseline. He was just able to find a play and we didn't rotate.

"That's a layup for Uriah."

Matrella said Aili was the third option on the play. Aili went back to his coach to see what his role in the play was.

"I said, 'You're on the wing, then you have to fill middle, they'll compress,'" Matrella said. "We got lucky and found him. He's so good at that free throw line jump shot. Thank God it went in."

Things actually looked pretty bleak for Bessemer in the first half.

Borseth and his teammates were able to get to the basket and lead by as many as seven points in a great first half in front of their home crowd. Borseth had 15 in the first half.

"Who aas a freshman come through in a district final? I mean are you kidding me," Besonen said. "He was big time. I've seen him play such great ball here this year and a couple times last year as an eighth grader, but the week he had I think he really solidified himself as not just the best young player in Class D, I definitely feel one of the top five in D. His potential is limitless, it's just all about how hard he wants to dig in and work."

Bessemer, though, found a glimmer of hope before the half.

They took the air out of the ball late, just wanting to get into the half not down anymore than seven with two players in foul trouble. Cade Mazzon stuck a 3 to make it even more manageable, 25-21.

"That shot might have been the biggest shot of the night because it, one, it obviously got him going, but, two, it gave us something positive going in. Something went well," Matrella said.

Mazzon made it big because he came out in the second half hitting them as well. He hit two right off the bat and his personal 9-0 run gave Bessemer a 27-25 lead all of a sudden.

He hit two more later in the quarter, giving the Speedboys a 38-31 lead and all of the momentum with their student section rocking the gym.

"Coming out of halftime, I knew we needed to score because we were down and I just shot and it went in, for once," Mazzon said.

Matrella thought his team missed some good shots in the first half.

"I really felt that we're too good of a team to continue missing those," Matrella said. "He hits a 3. I don't know if he had really taken a 3 most of the night, which he's known for, buries it. What a huge shot. Cade obviously carried us into that third quarter and almost all the way to the end of the game with his shooting."

E-TC also was struggling to score. Those driving lanes were basically gone. They were in trouble.

"I thought that was the biggest difference, outside of Cade hitting his 3s, I thought their helping on Jaden's drives was key," Besonen said. "Jaden was unstoppable in the first half, he was absolutely unstoppable. I thought he was the best player on the floor bar none."

That seven-point deficit, 38-31, was as bad as it got for the Panthers.

If you watched this group of E-TC players this week, you knew they weren't done.

They stopped the bleeding, keeping the deficit from three to five points for much of the fourth quarter. Nordine put them back in front with that huge 3. The only problem was there were 17.9 seconds left and Aili hit the last big shot.

"In the last three minutes, it was like a switch turned on him and he was just determined," Besonen said of Nordine. "It would have obviously been nice to find that last stop because we were so close to it. ... If you're going to lose to somebody hitting a game-winning shot, Uriah's been such a good kid. We kind of root for each other in the track and cross country realm. It doesn't sting as much to have him hit it because you know how much of a good kid he is and how much of a hard work he is.

Besonen was absolutely disappointed how it turned out. But he was also just so thrilled how his team that came into the tournament at 8-12 beat strong Ontonagon and Wakefield-Marenisco teams to earn a spot in the final and almost pull that off too.

"I'm so darn happy for my guys," he said. "This loss hurts because it was such a fun week for these boys. I don't know if I've ever been so proud of a team, sticking with a process.

"For them to be tough enough to be like, 'Yeah, whatever, we're losing these games, but we know we're getting better,' and to really believe it this week and just put it on the line, I really seriously could not be, I don't know if happy is the right word, but proud. Just very, very proud of the toughness they played with."

Besonen got emotional talking about Nordine's last game. He wasn't just a four-year starter for the Panthers, he was always a gym rat with Besonen over the years. He was so happy for Nordine when he scored his 1,000th point Wednesday.

"That's what's so fun about this, you get kids like this that you get so attached to it," Besonen said. "It's priceless, it really is."

Borseth led E-TC with 21 points, Nordine had 10. Tommy Cousineau had 17 points, capping off a stellar week for the sophomore.

"Big-time shots, big-time hustle plays, he's got a lot of potential for us in the future," Besonen said. "He's really taking this loss hard, which you feel bad for him, but I'm really happy it stings that much now, that's how much he cares about it." 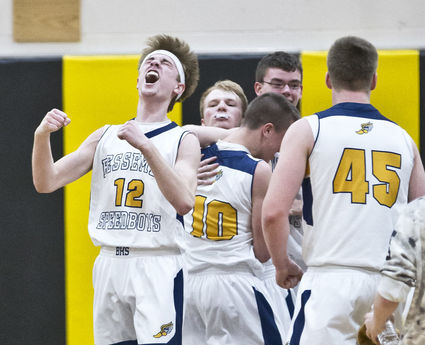 Mazzon had 20 points to lead Bessemer and Busch scored 10.