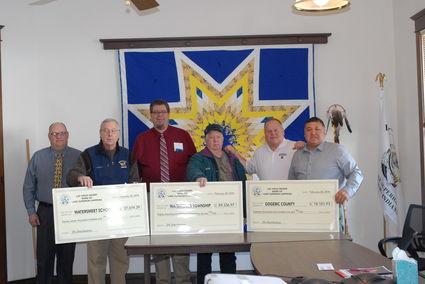 Watersmeet - The Lac Vieux Desert Band of Lake Superior Chippewa presented five checks for nearly $140,000 to local townships and school districts on Monday at the Tribal Offices in Watersmeet.

Jim Oliver, the GOISD's director of businesses and finance, said the school appreciates the help.

"This years money will be used to fund a Career and Technical Education Program," he said. The program will allow students to learn skills like welding and milling.

"On behalf of Gogebic County, we thank the Lac Vieux Desert Band of Lake Superior Chippewa Indians very much for their contribution," he said.

Gogebic County has received money for the last five years and it is very much appreciated, he added.

Chairman for the Tribal Council, James Williams Jr. said it means a lot to the tribe to be able to help the local community with projects that have the most impact. He said revenue is down at the casino, which means the 2 percent of income from slot machines that the tribe is required by treaty to contribute to local causes, is a little smaller than previous years. But, he said they like to see that money goes to worthwhile causes.

"We're able to still give and prioritize things that fit the community the most, he said. "We're very proud of that."

The tribe has been contributing to the community through the 2 percent agreement for more than 20 years, he added.

Williams said he has held the position of tribal chairman for almost 18 years, but has been the tribal leader for more than 30. One of his more memorable projects he said the tribe achieved during his leadership was building the clinic in Watersmeet. The $14 million clinic has provided tribal members and the surrounding communities with "high level of services," which are not only for the tribe, but open to the public as well, he said.

"It has been a blessing since it has been opened," he added, "People don't have to travel so far anymore to get that service they need."

He said the tribe feels very fortunate to be a part of the good things the area is doing and plans to continue the partnership to bring economic and educational opportunities to the region.

"Watersmeet has been my community, I was raised here since I was 5," he said. "Just to be a big part of what happens up in this area is very special to me."