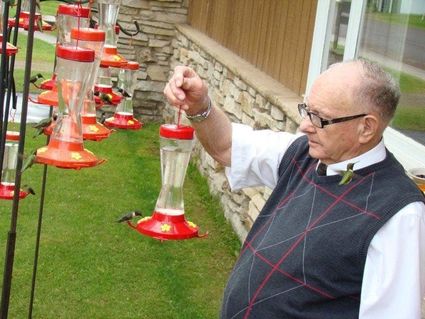 Bob was born on July 23, 1923, in Winegar, Wis., the son of Carl John and Agnes Anna (Hunt) Anderson. He graduated from Roosevelt High School in Marenisco in 1940.

For 42 years, Bob worked as a dispatcher and telegrapher for the Chicago Northwestern Railroad.

He was a faithful member of St. Catherine Catholic Church in Marenisco. Bob took great pleasure in feeding countless hummingbirds over the years. At one time, he had more than 18 feeders in his front yard. He loved walleye fishing, partridge hunting, snowmobiling and coffee with his friends.

A Mass of Christian Burial will be celebrated Saturday, March 16, at 11 a.m., preceded by visitation at 9:30 a.m., at St. Catherine Catholic Church in Marenisco, with the Rev. Dominic Agyapong, celebrant.

Pallbearers will be Bob's friends.

A luncheon will be served at the Marenisco Township Hall following the Mass.

The family would like to express their deep appreciation to the caring staff at Aspirus Ironwood Hospital and Essentia Health-St. Mary's Medical Center in Duluth, Minn., for their compassionate care of Bob.