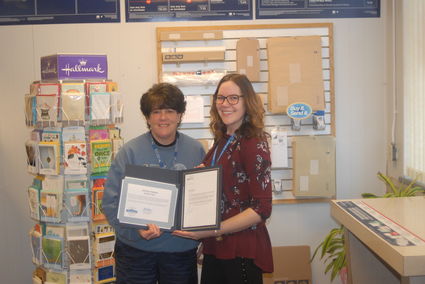 WAKEFIELD POSTAL employee Sandy Olson, left, stands with Drew Tikkanen, Wakefield postmaster, as they both hold up Olson's commendation she received from the Postaster General.

WAKEFIELD - When Wakefield postal worker Sandy Olson smelled a "awful" smell while delivering a package, she knew something was not quite right.

"I didn't really think anything about it until I got out of my vehicle," she said.

The smell was so bad, she said it almost made her puke.

Once she discovered the source of the odor was a gas leak, Olson said she pounded on the door. Receiving no response, she checked the garage to see if the homeowner's vehicle was there.

"The car was gone, so I felt better," she said.

Having no cellphone, she drov...