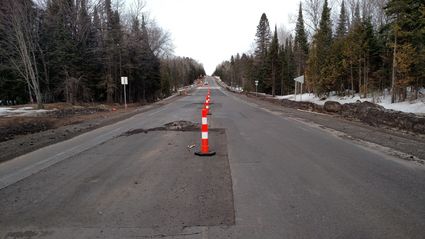 M-28 IS down to one lane at the bridge over Jackson Creek east of Wakefield Thursday to allow workers to repair damage to the western bridge approach. The highway was closed for roughly five months last year after the project to replace the bridge faced several delays. The late finish meant the pavement of the approach was put in after the ground was saturated, leading to the damage now being repaired.

WAKEFIELD - Work has once again begun at the M-28 bridge over Jackson Creek - only this time drivers should be able to continue using the highway during the construction.

The delays in replacing the bridge east of Wakefield that kept M-28 closed for longer than expected last year continue to cause problems as the highway was reduced to one lane Thursday to allow for additional work on a bridge approach.

Michigan Department of Transportation spokesman Dan Weingarten said some of the pavement on the bridge's west approach needed to be repaired af...