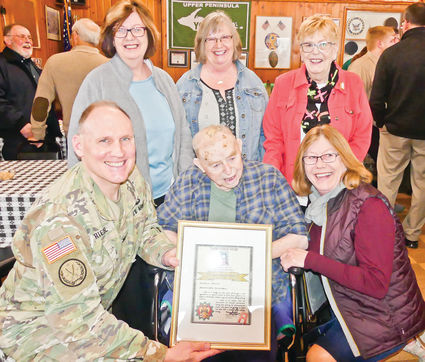 WAKEFIELD - The family of John M. Pachmayer aimed to have 100 people at his 100th birthday last Saturday, and that objective was likely achieved.

The celebration began with a social time in the bar area of Wakefield VFW Post 9084, where friends, family members and associates gathered as immediate family transported Pachmayer around the room in his wheelchair.

Pachmayer was born on April 8, 1919 to the late Charles and Anna Pachmayer in Ironwood and lived mainly in this region throughout his life.

In relation to his service in World War II, Pachmayer earned five battle stars and two presidential citations for his time in the U.S. Army.

Ann Wuorinen, one of Pachmayer's four daughters, told the Globe that she did not know the details of her father's military service until she processed his belongings after he moved to a care facility.

Wuorinen said her father was a bit "overwhelmed" by Saturday's excitement, but he seemed to enjoy the opportunity to interact with his loved ones.

He also lit up when Col. Kyle Riedel of the U.S. Army approached him in Army fatigues to offer special recognition for his service.

"What a milestone today is for you," said James in the presentation. "We are honored to send you this birthday message. We are humbled by your service."

Riedel also presented Pachmayer with a framed certificate that stated he is "now registered as an official member of Task Force Deed and is subject to all benefits entitled to any and all First Family Army members."

The First Army is defined as "the oldest and longest established field army of the United States Army" with a history including both world wars.

Markkanen said it was "a special honor" to present the proclamation because he had served in the same U.S. Army unit as Pachmayer.

"I get emotional just thinking about it," said Markkanen, who added in his address to Pachmayer, "Thank you for everything. It was an honor to know you."

The framed document described Pachmayer as "a true American hero" worthy of "deep admiration and respect."

It detailed Pachmayer's military history as having started when he joined the U.S. Army in 1942, after which he served in various locations, including Italy, France, Britain, Germany and Africa.

According to the proclamation, Pachmayer was a member of the 82nd Airborne Division, in which he was a "proud member of the first glider unit to see combat in World War II."

He was commended for undergoing prolonged "intense battle" and for participating in the D-Day Normandy Division and then also in the Battle of the Bulge.

After his service, Pachmayer became a master electrician and the owner of Pachmayer Electric.

Pachmayer's wife, Goldie (Julian) Pachmayer, died in 2007, but Casperson said the couple had been "happily married for 60 years."

The former senator drew laughs from the crowd when he patted Pachmayer on the back and added, "Thanks for the example, John."

The party included a table with two large cakes, as well as a photo board commemorating Pachmayer's history.

Lillar, who also greeted guests and engaged in mop duty as needed, was part of a kitchen team of VFW and auxiliary members that prepared a full, hot dinner for the event.