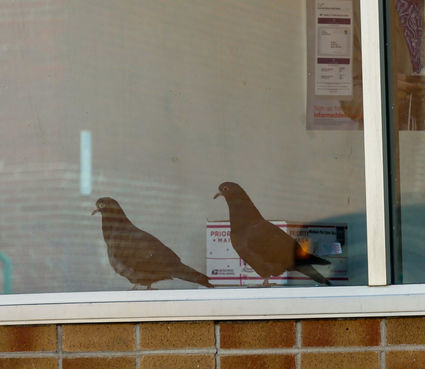 PIGEONS PEER out of the front window of the Ramsay Post Office Monday morning. The birds apparently entered the building through an area of exposure directly under the collapsed roof. Regional postal authorities in Grand Rapids closed the building on March 8 due to potential danger related to the damage.

RAMSAY - The U.S. Post Office in Ramsay has been locked for more than five weeks, since regional postal authorities in Grand Rapids posted a notice of closure on March 8.

On Monday morning, a pair of pigeons peered out of the front window having likely entered via an exposed region directly under the collapsed roof.

Speaking by phone afterwards from Grand Rapids, postal spokesperson Sabrina Todd said she would inform local authorities of the situation.

As for the building's fate, Todd said no determination has been made yet.