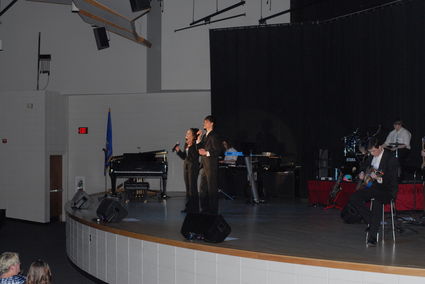 DAYANNA IRONS, left, joins Cody Sobrack in a duet while Sophia Villanueva plays the keyboard, Jackie Bradley plays the drums and Devin Kelly jams on the Guitar during Silver Express 2019 Spectacular concert. Friday's event was the last concert held at the school for the 2019 group.

HURLEY - The 2019 Silver Express performed in front of a nearly sold out crowd at its last concert at the school on Friday evening.

Silver Express co-director Roy Haeger said the band is going on tour, "But will play a few songs" during graduation.

"This is the last hurrah for the seniors," he said.

Silver Express member Cody Sobrack sings, plays the saxophone, piano, harmonica and cowbell and said being in the band has been a lot of fun.

"It's a bunch of talented kids and (they) use their talent to form one big band and play songs people are f...