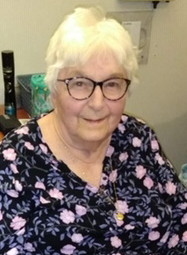 TRAVERSE CITY, Mich. - Rosemary M. Moselle, 90, of Gwinn, passed away on Wednesday, May 8, 2019, surrounded by her loving family at the Grand Traverse Pavilions in Traverse City, where she had resided the past three years.

Rosemary was born on Oct. 19, 1928, in Jesseville, to the late George and Anna (Murra) Jelich. She graduated from Luther L. Wright High School in Ironwood.

Rosemary married Anthony D. Moselle on Aug. 1, 1953, at Holy Trinity Catholic Church in Ironwood. Rosemary moved to the Gwinn area in 1965. She worked at the Gwinn Schools for many years as a payroll benefits coordinator. She enjoyed traveling to Florida and spending time with her family, especially her grandchildren. Rosemary was a member of St. Anthony Catholic Church in Gwinn, the VFW Women's Auxiliary and RSVP.

Besides her parents, Rosemary was preceded in death by her husband, Anthony, on March 9, 2011.

Visitation will be held on Friday, May 17, from 2 to 4 p.m. at St. Anthony Catholic Church in Gwinn. A funeral Mass will be celebrated at 4 p.m. in the church with Rev. Allen Mott officiating. Interment will take place in the Gwinn Cemetery.

Rosemay's family would like to thank the staff and caregivers at Grand Traverse Pavilions who so lovingly cared for their mother.

The Canale-Gwinn Funeral Home is assisting the family where memories may be shared at canalefuneral.com.