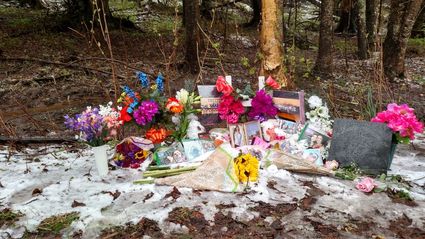 A MEMORIAL sits on the shoulder of Lake Road near Powers Road Sunday at the site of a car accident that killed two teens Saturday morning.

IRONWOOD TOWNSHIP - Two teens are dead and a community is mourning the loss following a single-vehicle crash near Little Girl's Point Saturday morning.

Deputies arriving on the scene located a vehicle that sustained severe damage after it left the roadway and struck a tree, according to a department news release.

Two girls, ages 18 and 15, died in the crash, according to the release. A third occupant of the vehicle,...