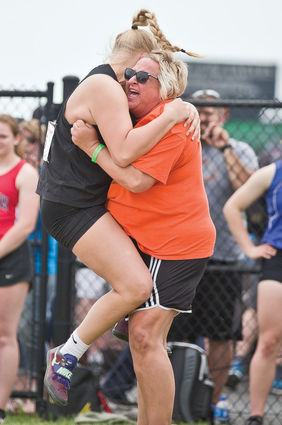 Mercer's Aubrey Schoeneman jumps into the arms of her coach and mom, Robyn Schoeneman, after winning the state championship in the WIAA Division 3 shot put at La Crosse, Wis., Saturday.

While she made it to state in the shot put, she missed out in the discus, an event she probably would have won, and won by a lot, in La Crosse.

The shot put, on the other hand, was ultra competitive. She was tied for the high seed coming into the state meet where four people would ultimately clear 40 feet. And despite a really good first throw Saturday, Schoeneman was in second place.