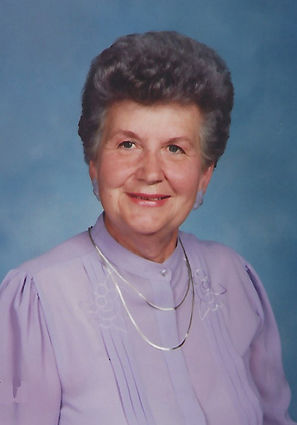 Virginia was born on Aug. 24, 1924, in Marshfield, the youngest of five children for Frank and Josephine (Reibhoff) Sudmeier.

Virginia met the love of her life, Mike Pavlovich, after he returned from service in World War II and they were married on June 4, 1949. They were blessed with three children, nine grandchildren, and nine great-grandchildren and enjoyed 65 years of marriage until his passing in 2014.

Virginia was an active member of Our Lady of Peace Catholic Church, formerly Holy Trinity, in Ironwood. She taught religious education and was a member of the evangelization committee. She also volunteered at Grand View Hospital for 20 years, was a member of the Michigan Association of Retired School Personnel, was the secretary treasurer and member of the Gogebic Range Tamburitzans, and volunteered as a mentor in the math program at Even Start.

Virginia was an avid reader, and enjoyed music, crossword and Sudoku puzzles, traveling, spending time with her beloved family, and was a huge Green Bay Packers fan.

Virginia was preceded in death by her parents; her husband, Mike Pavlovich; her siblings, Jeannette Sudmeier, Ed (Dorothy) Sudmeier, MaryAnn (Howard) Doehling, and Robert Sudmeier; her daughter-in-law, Bobbi Pavlovich; her great-granddaughter, Peyton; as well as several sisters-in-law and brothers-in-law.

A memorial service was held at Touchmark on Prospect Street in Appleton on Saturday, June 1, at 1 p.m. A Mass of Christian Burial will be held on Friday, June 7, at 11 a.m., at Our Lady of Peace Catholic Church at 108 S. Marquette St. in Ironwood. Visitation will be held in the St. Joseph Family Room at the church from 9 a.m. until the time of service. Burial will follow at Sunset Acres Cemetery in Ironwood Township.

The family would like to extend a special thank you to the wonderful staff at The Admiral at Touchmark, who cared for our loving mother in her final days.