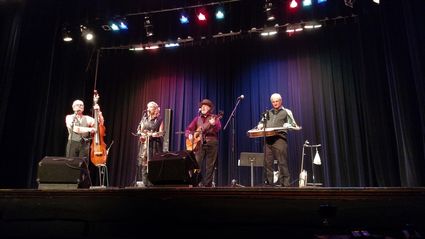 Ironwood - The audience at the Historic Ironwood Theatre was treated to a night of string music Saturday as Molly O and the TrueGrass Band performed a mix of original tunes and bluegrass staples.

The group featured Bayfield resident Molly Otis, who toured the world in the early '90s as her band, Molly and the Heymakers, reached the top 50 on the charts with the single, "Chasing Something Called Love."

Otis told the audience Saturday she still loves performing, but life on the road isn't what she's interested in anymore.

"I like being at home and being able to play like this in the region," Otis said, who talked about how much she enjoyed playing around the Northwoods and in Big Top Chautauqua productions.

Each had the chance to showcase their talents and various instruments through solos and songs.

With all four performers having experience at the Lake Superior Big Top Chautauqua, over 100 years of combined professional performing experience was on stage Saturday - much to the enjoyment of those in attendance.

Often the group entertained the audience with the stories behind the inspiration of their original works.

Draughon recalled performing at the Branding Iron in Hurley with a band in college, which led into his song "I Want to go Back to That Time," about a college reunion he attended.