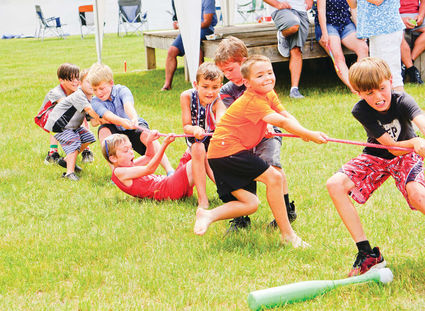 The boys team pulls against the girls in a tug-of-war contest during Fourth of July games at Carow Park in Mercer on Thursday. While the morning's parade drew a large crowd, the evening's fireworks were postponed until Saturday due to a line of thunderstorms that moved through the region later in the day.

MERCER, Wis. - The rain held off long enough for Mercer to hold its Fourth of July parade downtown Thursday and an afternoon of food and games at Carow Park, but the evening's fireworks were postponed until Saturday at dusk due to a line of thunderstorms that moved through later in the day.

In the morning, people lined both sides of main street to watch the parade on the theme, "America to the Moon and Back: 50 Years" to acknowledge the first manned lunar moon landing on July 21, 1969.

"This is definitely a big town effort," said Melissa Bisza...