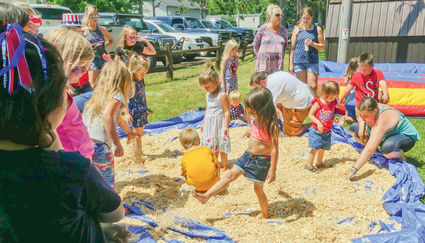 CHILDREN AGE five and under participate in a coin scramble that was part of Fourth of July activities on Saturday at the Watersmeet pavilion. The object was to find coins hidden under a layer of sawdust

WATERSMEET - The region's Fourth of July celebrations concluded on a sunny, warm Saturday with a full schedule of events in Watersmeet, which offered a parade, picnic, and fireworks, along with numerous activities.

The parade route along U.S. Hwy. 45 featured flags posted on intermittent light poles, with people lining the street on both sides for a procession led by local veterans.

"Yooper Pride" was the parade theme, which was boldly expressed by Nordine's Plaza in Watersmeet, which won first prize among entrants. Children grabbing candy tossed from that float had to face the possibility...