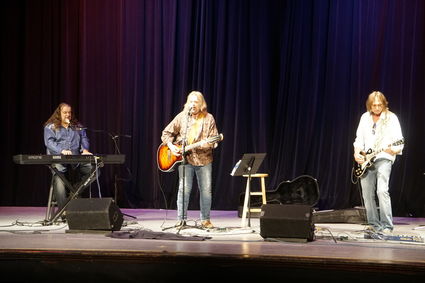 The Richrath's Project 3:13 performs Friday evening at the Historic Ironwood Theatre, following a screening of the rockumentary film, "The Seeds: Pushin' Too Hard." From left, Scott Weber, keyboardist, Michael Jahnz, lead singer and Doug Janssen, lead guitarist. The band is on the same GNP Crescendo label as were The Seeds in the 1960s.

IRONWOOD - Patrons said the topic of a music documentary drew them to the Historic Ironwood Theatre on Friday, but to have the filmmaker present with a touring recording artist was something special.

Filmmaker Neil Norman, who was present to introduce the film, "The Seeds: Pushin' Too Hard," said the Minneapolis screening had sold out but that he was still honored to speak to the small crowd here who he called the "V.I.P's of Ironwood." The documentary project about the 60s band The Seeds took six years to complete in 2013, he said.