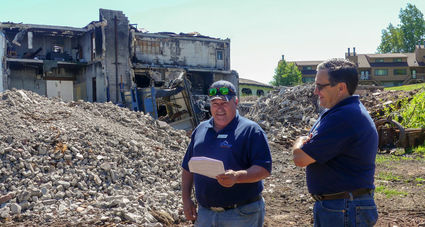 OFFICIALS AT Whitecap Mountains Resort in Upson, Wis., engage in a Saturday discussion regarding progress made in the demolition of their base lodge, which was lost to a Jan. 18 fire. From left are Don Odell, director of mountain operations, and resort manager David Dziuban. So far, Dziuban said 50% of the burned structure has been deconstructed. The men said the pile of rubble to the left will be used during reconstruction that will begin next year. Steel beams that originally were used for structural purposes in the lost lodge also will be repurposed as decorative elements within the anticipated new lodge.

UPSON, Wis. - The charred remains of the base lodge at Whitecap Mountains Resort are now in the process of being demolished after a Jan. 18 chimney fire destroyed the building in Upson, Wis.

David Dziuban, who manages the 400-acre resort, said Saturday that his own staff so far has deconstructed about 50 percent of the ruined structure.

Dziuban said they are employing a deliberative approach "to limit as much as possible what goes to landfills." He added that the goal is to repurpose when possible.

According to the manager, it was necessary to wait f...