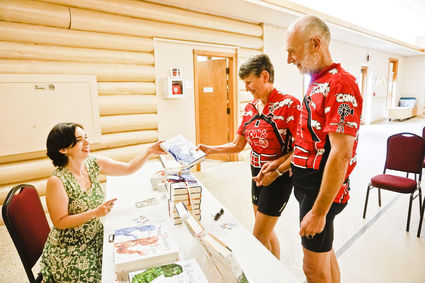 Author Callie Bates presents a signed copy of her new book "The Soul of Power," to Peggy Bronsberg, and her husband, Bernie Langreck, following an author presentation at the Mercer Community Center on Wednesday, sponsored by the Mercer Public Library.

MERCER, Wis. - Author Callie Bates said her passion for telling stories and an interest in fantasy and mythology shaped her direction.

Speaking to Mercer residents about her career on Wednesday at the community center, Bates talked about her new book "The Soul of Power," which is the final of a three book "Waking Land" trilogy published by Del Ray Books. She also told stories about her life and what pushed her to become a writer.

"Callie is published by Del Ray, which is considered the biggest name in science fiction," said Teresa Schmidt, director of the Mercer Library. "Mercer is pretty proud to have Callie in the community."

The first book in the series, "The Waking Land," is the story of the daughter of a king who must flee following his mysterious death, and try to understand the emerging magical powers she does not understand in order to lead a rebellion. The second book, "The Memory of Fire," continues the story with a new threat emerging and a male hero who is persecuted for his magic as he attempts to pursue peace with an empire amidst more internal troubles.

Bates said the series conclusion, "The Soul of Power," is the view of a rebellion through the eyes of a woman who suddenly finds herself the reigning monarch amidst a plotting court, dark secrets and magical obstacles.

"I do have readers who tell me they are very excited to see the last book come out," Bates said.

"The books can be read alone but there is an over-arching storyline," she said. "Each book builds on the previous and are probably best read in order because the action builds toward the climax in the third book."

Bates was raised in Manitowish Waters and attended Mercer School through sixth-grade. She was home schooled through high school.

Her parents read books like the J. R. R. Tolkien series to her as a child. She loved dressing as the characters she read about and her interest in books included anthropology and historical mythology.

"I was probably the only 10-year-old, possibly in the world, who owned a copy of the Welsh epic, Mabinogion," Bates said.

She recalls having an existential quandary about what to do with her life. Her friends all had ideas of what they wanted to be and she was on an alternate path having written novel length stories by age 12.

"I wanted to become a Welsh Bard," Bates said. A bard is considered a professional story teller, cultural historian and would know all the stories and songs from medieval culture.

Bates said it was stubborn persistence that pushed her into writing. She enjoyed the process and took all the creative writing courses available while studying for a degree from Lawrence University in Appleton, Wis.

"After college I just kept writing," Bates said. "I had some experiences that made me think this is what I needed to do and this is what I'd like to do."

Those experiences included feedback from instructors and fellow writers at a time when she was questioning herself about becoming a professional writer. That affirmation, spoken and unspoken, from people who teach creative work is important and makes the difference in a writer's will to succeed, she said.

That story was an early draft of "The Awakening."

"I was on the verge of saying I don't know if I'm really supposed to be doing this, and then I would get feedback from someone who would say this book really needs to be out in the world and deserves to get published," Bates said.

Bates searched for a literary agent who understood her writing nearly as well as she did and could provide the type of advice that would help get the book accepted by a publisher. Some writers talk about terrible experiences with publishers but her relationships are positive and essential to the process, she said.

"The people I work with in publishing have by in large made my work better and have brought it more into fullness," Bates said. "I would not want to have published my books without their feedback."

With the trilogy complete, Bates said her new projects include a high fantasy mythology retelling; a contemporary novel with fantastical elements, and a historical fiction work with some fantasy elements.

"I feel that everything I write is going to have some element of the fantastic in it, and some element of fantasy, but I don't necessarily want to stick to purely high fantasy and I am interested in experimenting with other types of fiction," Bates said.

At this point in her career Bates said she considered living elsewhere but the Mercer area has something here that keeps her grounded. She is an outdoors person but it's also about being rooted, she said.

"It really feeds me in a deep way," Bates said. "I don't know if I could uproot and still feel that sense of a deep creative well the same way in another place. I am sure that I would still be writing and creating but there is something about being here that is very nurturing."