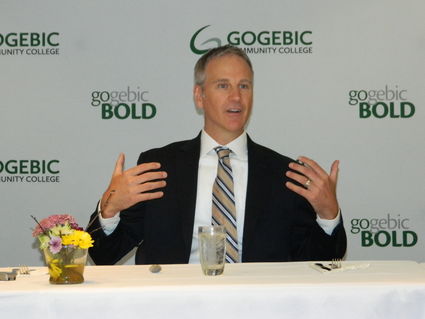 George McNulty, Gogebic Community College's new president, speaks to the media at a luncheon held at the Lindquist Student Center on the Ironwood campus Monday afternoon.

Ironwood - Gogebic Community College's new president met with members of the media during a noon luncheon Monday at the college.

George McNulty, president of GCC since July 1, shared his vision of the college as moving forward together by dreaming and living bold.

"If we keep that vision strong through every endeavor," he said, "great things can happen."

Originally from Northern California, he moved to Reno, Nevada, where he said his career in higher education began.

"It's where I really learned the ability we have to influence our students and make their lives better," he said adding the "ripple effect" to that impacts other lives.

Most recently, McNulty was working in administration at Colby Community College in northwestern Kansas.

McNulty said one thing that is clear about community college students is they are generally disadvantaged from an economic, cultural and social perspective.

"Well over 50% of our students, and it could even be over 60%, are placing into developmental math and English," he said, adding that percentage of students entering the system "behind the 8 ball" requires the college to help the students progress through the curriculum.

The more developmental courses a student needs to take has a negative impact on that student's success, he said.

McNulty said the college needs to meet students "where they are at" and there is no pre-prescribed ideas put on the them about who they are going to be and where they are coming from.

"We have to personalize the (college) experience as much as we can for students," he said, adding his key goal is the success of the students.

McNulty said before interviewing for the position he "took note" of what was being printed about in the area.

"As an applicant, it was very important for me to read what was going on because it gave me a better perspective of the community," he said.

McNulty was interested in GCC for its growth and development opportunities, which he said are significant. The rural community college environment along with the area's "natural beauty," he said also initially played a big part in his decision to join the college.

"Over time, I have gotten to know people and have seen a very engaged faculty and staff," he said. "One of the most important things a college has is its people."

McNulty said he felt a connection to the community and wanted to be part of it.

"If I could highlight one area where I'm very proud to be associated with GCC it is the community connection and the importance that we have in serving our community," he said.