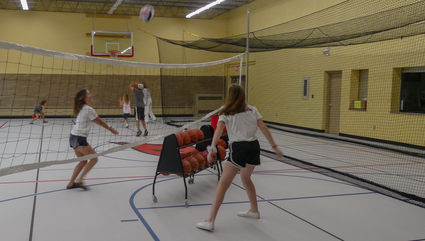 STUDENTS OF Wakefield-Marenisco K-12 School engage in some lively summer exercise on a rainy Friday in the community room of the Wakefield municipal building. Thanks to more than $27,000 raised from a local group called 4 the Kids, the community room has been transformed in the past year to serve a dual purpose as a practice gym. Playing volleyball are, from left, Julia Tarro, 16, and Kayla Zeckovich, 12. Behind them, at left, Emily DelFavero, 10, shows great form dribbling while her brother, Antonio DelFavero, 14, prepares to toss a basketball into the hoop. Meanwhile, siblings Noah Brown, 16, and Kaitlyn Brown, 9, stand ready to take a turn. The large, netted area to the right is a batting cage, which will be set up for use during spring season baseball practice.

WAKEFIELD - Early last year, there was a recognition among local citizens that younger athletes at Wakefield-Marenisco K-12 School were not getting enough practice in their chosen sport.

Mark Lane, the school's athletic director, told the Daily Globe that it was "tough" to give every level of students the attention they needed when he and other coaches had to prioritize varsity-level athletes.

He estimated that at least half of the school's nearly 300 students are involved in some sort of sports and concluded that second through sixth graders paid th...