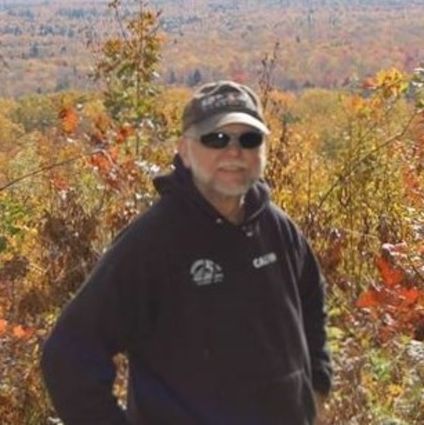 IRONWOOD, Mich. - Calvin John Kangas, 67, of Ironwood, passed away Monday, July 15, doing what he loved to do, working on the North Country Trail reroute in the Porcupine Mountains State Park. He was born June 18, 1952, in Wakefield, son of John and Signe (Franti) Kangas, of Ewen, where he grew up, graduating from E-TC High School in 1970. He earned a BS degree in forestry from Michigan Tech in 1975.

Spending his entire working career in the hardwood lumber industry in the UP and Northern Wisconsin, he loved the smell of new lumber and felt right at home with sawdust on his clothing. He met Susan Johnson on the 4th of July, fireworks went off, and they were married on April 14, 1979.

Growing up with a love for the woods and his surroundings, he followed Dad and his buddy Art Huhtala into the woods on the North Baltimore grade to hunt birds and deer, and he learned lessons about the appreciation of wildlife and the forest that could never be replicated in textbooks. Calvin and Susan took several months off from their jobs and hiked 1,600 miles of the Appalachian Trail, an experience that they would never forget. The annual winter camping trips to the Baltimore River Falls with childhood friends Rodney Besonen and Jim Ojala were memorable. His hunting trips to Ned Lake with Denny were fall rituals, and Calvin's story of the moose that stalked him in knee-deep fresh snow, finally ending in a heart-to-heart talk with the moose indicating that neither one had to admit defeat if that was all right with him, sent each on his own way. Just a few months after heart bypass surgery, he was hunting in Bessemer when he shot the biggest buck he'd ever seen. Knowing he needed help, he called brother-in-law Jim and nephew Jeff in Marquette to help retrieve it. Jeff did most of the work for nine hours, dragging a few yards at a time through deep woods and valleys. In later years, Calvin's hunting usually involved a quiet walk in the woods with a rest on a log, watching the wildlife.

After retiring in 2014, he looked for productive ways to spend his time. The Gogebic Range Trail Authority was looking for snowmobile groomers, and Calvin jumped on the big rig and spent countless hours, usually from 7 p.m. to 2 a.m., grooming trails and training other groomers. Always interested in hiking, he learned that the North Country Trail was looking for help, and eventually became president of the local chapter. He enjoyed walking the trails, trimming and clearing brush, rebuilding walkways, doing anything that was needed. The reroutes were the most fun to him, and it is fitting that this was his final project.

Never one to sit back and watch others work, he helped many friends with building projects and volunteered for St. Vincent DePaul as a driver. He loved to read nonfiction history and biographies, going to camp, riding trails with Susan, and his Michigan Tech Huskies, never missing a hockey game either in person or on the computer.

In addition to his parents, he was preceded in death by his sister Joan (Jim) Vaughan, in-laws Arvo and Joy Johnson, and nephew Michael Johnson. Never being without a canine friend, Buddy also survives.

In honor of Calvin, on a nice fall day, put on a pair of camo pants, a comfortable t-shirt, a pair of well-worn hiking boots, a cap, grab a thermos of coffee and a sandwich and head into the woods, remembering to stop and sit on a log and look around to appreciate what nature has created.