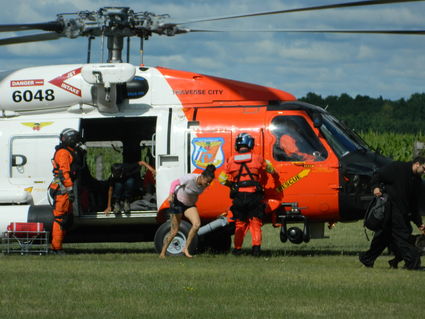 A U.S. Coast Guard helicopter dispatched from Traverse City lands on a baseball field in Gurney Tuesday morning after rescuing three adults and three children who were stranded overnight on the shore of Lake Superior near Marble Point. Besides being cold and wet, the individuals, as well as the family dog, Manny, came out of the ordeal uninjured.

SAXON, Wis. - Six people are safe after the U.S. Coast Guard and local personnel rescued them Tuesday after they became stranded on the shores of Lake Superior in northern Iron County.

One adult and two of the children were stranded after hiking east along the shore from the Madigan beach area Monday, according to a news release from Iron County Sheriff Paul Samardich.

"Apparently, an effort to recover the pa...