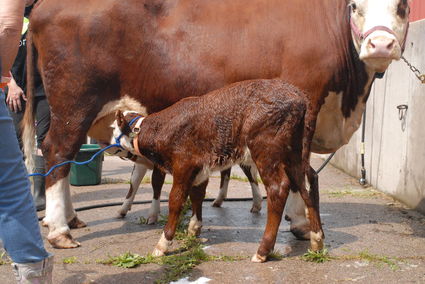 MAX NURSES from his mother, Teeny Tiny after being washed in preparation of the Iron County Fair's market day to be held on Saturday. Brodie Erickson, Teeny Tiny's owner, has spent many months raising the Hereford to show at the fair. "She's not so teeny tiny," he said with a grin.

SAXON - Tables were hosed off by the Saxon/Gurney fire department and animals bathed on Thursday in preparation for Iron County Fair.

Brock Swartz, vice president of the fair committee, said the fair is made possible by a collaboration of volunteers, children and local business owners.

"This is our big weekend," he said.

Forrest Movrich, from California, said his family is friends with the owners of a neighboring farm and was asked if he wanted to show an animal at the fair.

Living in California do...