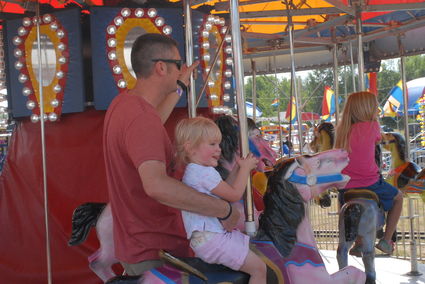 OLIVIA GEACH, 2, rides the carousel with her dad, Jason, Sunday at the Iron County Fair in Saxon, Wis.

SAXON, Wis. - The town of Saxon was the hot place to be this weekend as the Iron County Fair drew crowds from around the region.

"(The fair) went really well. We were blessed with beautiful weather all three days," said Cortney Ofstad, the fair's marketing coordinator. "Our attendance Friday was excellent with our Five Dollars after Five promotion. We had great, great attendance yesterday - the carnival was as packed as I've ever seen it ... lots of kids, lots of families, which is good.

"Today has been great as well, we're watching that pavilion and that pie auction and it's jam-packed in there. It's been good."

Even temperatures in the 90s weren't enough to turn people off from this year's fair, Ofstad said.

"I think the allure of ice cream, deep-fried foods and that sort of thing (helped). You just can't keep people away," she joked.

This year's fair featured many of the annual traditions - such as the draft horse pulling contest, 4-H pie auction, carnival rides and livestock auction. There were also new attractions, according to Ofstad, such as the U.P. Boot Scooters, a line-dancing group.

Part of the fair's draw, at least on Friday, was the Five Dollars after Five promotion. For the last two or three years, the fair has offered a discounted admission rate after 5 p.m. on Fridays.

Ofstad said the offer was intended for those who have to work Fridays and can't attend the whole day of events.

"It has been a smashing success since we started it," she said.

With this year's fair done after Sunday, Ofstad said it won't be long before organizers begin work planning for next year's event.

"It is definitely a year-long process," Ofstad said.

She encouraged anyone with ideas for things they'd like to see next year to reach out to the fair.

"For people who are interested in bringing certain events in or want to bring events back we haven't had in a while, reach out. You can reach out to us on Facebook, on Instagram, if you know a board member," Ofstad said. "We're always looking for new stuff and trying to keep things fresh and new each and every year."

She thanked the fair board, the volunteers and especially the community for making the fair possible.

"I also want to (thank) ... every single person that walks through that gate. Without their admission prices, we can't have this fair. We can't put it on," Ofstad said.