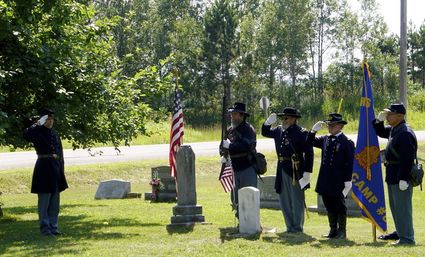 Members of Old Abe Camp 8, the Fox Cities chapter of the Sons of the Union Veterans of the Civil War, salute as "Taps" is played Saturday during a ceremony to honor Chester Huntsinger at his grave in Lake View Cemetery in Saxon, as Iron County's last surviving Union veteran of the Civil War when he died in 1914. The members include, from left, Brian Peters, Jim Schumann, Kim Heltemes, Sam Solberg and Kirby Scott.

SAXON, Wis. - A unique ceremony was held Saturday at the graveside of a Civil War veteran in Lake View Cemetery in Saxon.

More than 100 people watched as five members of the Sons of Union Veterans of the Civil War - Old Abe Camp 8 post near Appleton, honored Chester Huntsinger, who passed away in 1914 as Iron County's last surviving Union veteran of the Civil War. Members of the area American Legion, Veterans of Foreign Wars and the Vietnam Veterans Chapter of Iron County also participated with an honor guard, a bugler to play "Taps" and fire a...