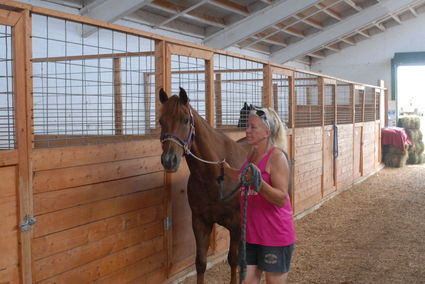 MARLENE HOLDEN walks Kaylan Bolaski's horse, Buck, into the barn at the Gogebic County Fair on Thursday. Holden said she brought a horse and a donkey of her own and is entering her first jumping competition.

IRONWOOD - Animals and exhibits were brought into the Gogebic County Fairgrounds on Thursday as vendors set up to prepare for the fair.

Jim Lorenson, fair board president, said the weather is beautiful for set up day for the fair.

"Nice moderate temperatures," he said. "Thats the forecast for the next few days."

The carnival and rides were close to being set up and Lorenson said they would be open later in the evening.