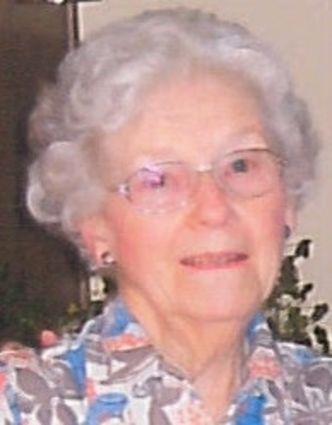 Irene was born on March 21, 1924 in Wakefield, a daughter of Andrew and Mayme (Burg) Pitkanen. She graduated from Wakefield High School in 1942 as salutatorian of her class and while in high school earned the honor of being named Potato Queen of Gogebic County. After graduation, Irene moved to Chicago for work.

In August of 1943, Irene was united in marriage to Eddie R. Raisanen following his honorable discharge from the US Army. The couple married in Chicago and resided there for a brief time. Eddie continued his career with the State Police and together the couple resided at his various assignments in East Lansing, Rockford, Jackson, L’Anse, Manistique, Battle Creek, and Marquette, where they remained after Eddie’s retirement in 1967.

Throughout the years, the couple enjoyed traveling to Hawaii and Alaska, spending time with family and friends at their camp near L’Anse, picking berries, fishing, and being members of St. Mark’s Lutheran Church and Redeemer Lutheran Church. Irene especially enjoyed singing in St. Mark’s choir and being a member of their quilting ministry. She also enjoyed sewing and gardening. Irene’s love for singing carried over to Brookridge, where she sang with the Troubadours and the Sunshine Girls.

Irene is survived by her children, Ronald (Beverly) Raisanen of Harvey, Barbara (Allan) Rupiper of Eagle River, Wis., and Kenneth (Christine) Raisanen of Ontonagon, as well as by several grandchildren, great-grandchildren, two great-great grandchildren, and many nieces and nephews. Irene was preceded in death by her parents; her husband, Eddie; her brother, Leo Pitkanen; and sisters-in-law, Emma Pitkanen and Louise Pitkanen.

Private family graveside services will be held at the Park Cemetery in Marquette.

The family wishes to extend their sincere gratitude to the staff of Brookridge Heights Assisted Living and U.P. Home Health and Hospice for their loving care of Irene.

Fassbender Swanson Hansen Funeral and Cremation Services is serving the family, where condolences may be expressed online at fassbenderswansonhansen.com