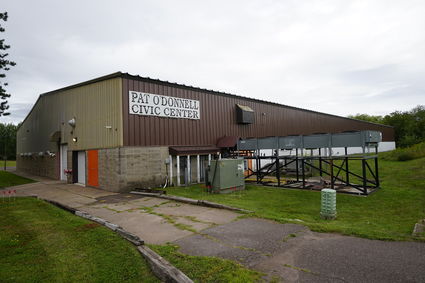 The Pat O'Donnell Civic Center as it appeared Tuesday next to the Gogebic Community College campus. The city's insurance company will remove the roof and walls that were damaged by heavy snow in March, to install a temporary dome for the winter season and to determine to rebuild or replace the structure next year.

IRONWOOD - The Pat O'Donnell Civic Center will have a temporary dome installed for use this winter, according to Scott Erickson, Ironwood city manager.

In his report to the Ironwood City Commission on Monday, Erickson said it is still not known if the civic center will be able to be rebuilt or need to be replaced with a new structure after the roof collapsed from heavy snow in March. But a temporary fix will allow the building to be used for winter activities as engineers determine what can be done with the structure, he said.