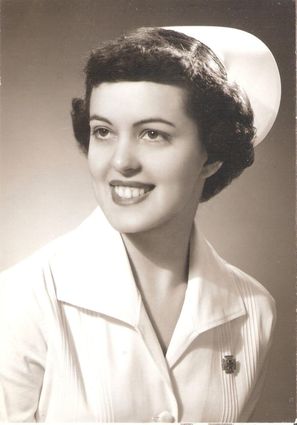 IRONWOOD, Mich. - Marilyn Frank, daughter of Leo and Gertrude (Ross) LaFave passed away Aug. 14, 2019, in Ironwood. She was born on Sept. 15, 1932, attended local schools, and graduated from Luther L. Wright High School in 1950. In 1953, she received her R.N. diploma from Wesley Memorial Hospital School of Nursing in Chicago.

On June 14, 1968, she married Jack Frank who preceded her in death on Nov. 2, 2008. She is survived by her son, Steve; grandchildren, Devon and Becca (Leif); great-grandchildren, Emmett and Jasper; and many friends.

She was a member of Wesley Methodist Church and active in the United Methodist Women's Group.

She was a loyal friend who maintained many lifelong friendships.

"I have fought the good fight. I have finished the race and I have kept the faith."

My mom wrote much of the above and as you can tell nursing was very important to her. I'd like to add that after retirement she never stopped helping others. She was always taking people to appointments, making nursing home visits, baking for various events, writing letters, and delivering raspberries. It was difficult seeing her as the care-receiver and no longer as the caregiver.

I would like to thank Jerika at River Valley Bank whose ongoing assistance helped my mom maintain some degree of independence for as long as possible and also the staff at Westgate for their care over the past several years.

When you walk through a storm

Keep your chin up high

And don't be afraid of the dark.

At the end of the storm

Is a golden sky

And the sweet silver song of a lark.

Walk on through the wind,

Walk on through the rain,

Tho' your dreams be tossed and blown.

Walk on, walk on

With hope in your heart