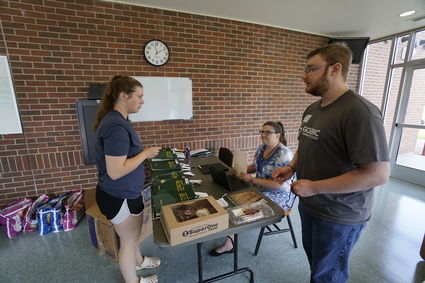 Heather Dickrell, a freshman from Ashland, Wis., checks in at the Campus Suites of Gogebic Community College on Tuesday, with Kristina Kendall, seated, staff accountant and administrative assistant to the vice president of business services, and Ryan Schober, a second floor resident assistant.

Ironwood - This week around 80 students are moving into the Campus Suites at Gogebic Community College to get settled prior to the start of classes on Monday.

"It's nice, I like it," said Kale Ruano, a freshman from Orlando, Florida, who arrived Monday night.

Ruano will study physical therapy. He is also on the GCC basketball team.

Heather Dickrell, a freshman from Ashland, Wisconsin, said she came to GCC to study elementary education and to play on the GCC women's softball team. Move-in day is a big new start, she said.

"Its exciting," Dickrell said. "I look forward to meeting new people and being on my own."

For Aaron Froelich, the Campus Suites manager, and his resident assistants, the goal is not just to manage the facility but to create a campus community among the students. The residents are mostly first and second year students and creating a healthy social environment is a pillar of a well-rounded education.

"Here, my job is to really create a community with these students and really make them feel connected," Froelich said. "It feels almost like a family or a home away from home."

The staff handed out folders with campus information, room keys, pens, stickers, snacks, water and household items. The lobby's white board has a calendar listing including the Friday barbecue picnic, inter mural sports and game nights.

"This all helps the students thrive, which helps the academic experience as well," Froelich said.

The building is expected to be fully occupied with 80 students in 40 rooms, he said. Every two rooms are part of a suite with a common restroom and kitchen area, he said.

On Tuesday morning Froelich and the resident assistants welcomed students and their families with push carts to save them trips back and forth to the car, and pointed out the elevator to the students living on the third floor.

Move-in day is exciting, but there can also be some nerves and a little bit of fear, he said. The students worry if they will get along with roommates, enjoy college or get homesick, he said.

"It can be a tough time sometimes," Froelich said.

There are approximately 870 total GCC students to get an idea of how important it is for the Campus Suites to fill an important role for the students who do not live off campus, he said.

The improvements to the Campus Suites over summer include upgrading the WiFi system to ensure the few rooms that never seemed to get a strong signal now do get quality access, he said. The first floor lobby now has a lounge with furniture and a television in addition to the second floor lounge.

Froelich was hired in May, and said he's been preparing all summer for the move in. He and the resident assistants trained to respond to emergency situations and enforce campus bans on alcohol, drugs and weapons.

There is only one dorm on campus and the doors are locked 24 hours a day, he said. Only the students and a limited number of staff members have key cards.

Froelich, of Eau Claire, Wis., is a graduate of Finlandia University in Hancock. He was a resident assistant while earning a degree in business and sports management.

The position will also allow him to be an assistant coach for the GCC baseball program starting next year, Froelich said. Starting coaching positions are often part time and the opportunity to manage the Campus Suites and coach is ideal, he said.

"That's the way it kind of goes in the coaching world," Froelich said. "You have to work you're way up the ranks."

Ryan Schober, a second floor resident assistant, said he is an Ontonagon native who recently completed his service with the U.S. Army and wanted to complete a general science degree at GCC before transferring to complete a four-year degree in electrical engineering. The resident assistant position duties to maintain the facility, organize community events and related chores are in exchange for a room, he said.

Schober said he identifies with students coming to a new place for the first time. He was pleased with the amenities available at GCC.

"Seeing so many new faces for the very first time and there is a kind of fear of the unknown," Schober said. "But there is that hope inside for something wonderful and this is a good environment."

Kristina Kendall, staff accountant and administrative assistant to the vice president of business services, set up a table in the Campus Suites to process the students as they arrived. She said it was a way of making the day a little less stressful by bringing the office to the students.

"Everybody here on campus is really happy when this time of year comes around because after the summer lull the influx of students adds a whole different vibrancy to the surroundings," Kendall said.

Providing quality housing is important but it's also about creating an environment where students can start fresh and build the relationships, personal and professional, that create a lifetime experience, she said.