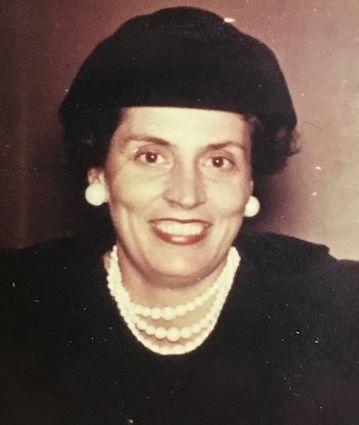 A celebration of Betty's birthday and life will take place Tuesday, Aug. 27, 2019, at Ritchay Funeral Home in Wisconsin Rapids. Visitation will be from 1 to 2 p.m. that day. Prayers will be said at 2 p.m. at the funeral home immediately following visitation. Burial will be at Riverside Cemetery in Ironwood, Mich., at a later date.

Betty was born in Ironwood on Aug. 27, 1921, to Fred and Mary (Gertz) Kavinsky. She was educated in the parochial schools in Ironwood graduating from St. Ambrose Catholic High School in 1940. She traveled to Detroit after graduation to work in the auto factory, doing her part for the war effort.

Betty returned to Ironwood where she married Francis Martin Kolesar on May 19, 1945. They had one son, Raymond F. Kolesar.

Betty had an illustrious career in food service, but if you asked her, she would tell you she was "just a cook." A small restaurant business of her own, Betty's Brown Café, quickly blossomed into many years of service for the Gogebic Country Club and the Elks Lodge. Known far and wide for her ability to prepare and serve anything, Betty cooked for movie stars, country club patrons, banquets of any nature, dog show judges, friends and family. Later she was wooed away to the Holiday Inn, where she received several accolades as employee of the year and often flown to Chicago for a celebration of her kitchen management skills and culinary achievements.

Betty moved to the Wisconsin Rapids area in the mid '80s after the death of her mother. There she became the live-in companion and caretaker for the elderly matriarchs of several families in the area. Highly sought after from one family to the next, she officially "retired" from caring for "old people" when her eyesight began to fail in her 80s.

Betty loved her family fiercely and none more than her only grandchild, R. Travis Kolesar, who delighted in spending summers in the north with his grandmother.

Thanksgiving was a special time for Betty as she prepared an epic feast for "orphaned" friends and family. Beyond cooking, baking and entertaining, she enjoyed her vegetable garden with a huge spot reserved for flowers, reading an endless parade of cookbooks and spending evenings on the porch with her little Brussels Griffon, Chyna.

She was preceded in death by her parents; her husband, Frank; her son, Raymond; two stepsons, Robert and Jack; three brothers, Fred, Ted and Ray; and her beloved dog, Chyna. She is survived by her loving brother-in-law, Bernard "Bobo" Kolesar; her daughter-in-law, Patti (Richard) Kolesar-Stoltz; her grandson, Travis (Nicole) Kolesar; and several nieces and nephews.

The family wishes to extend our sincere appreciation to the staff of Edgewater Haven, Heartland Hospice Care and Aspirus Riverview Hospital for their kind and professional care during Betty's brief illness; and to Betty's friends, Sherry, Paula, Ngaio and Father Bruener for their vigil and prayers during her last days.

"But when the sun in all his state illumed the eastern skies, she passed through Glory's morning gate, and walked in Paradise."