Strong response to call for support at Danny B 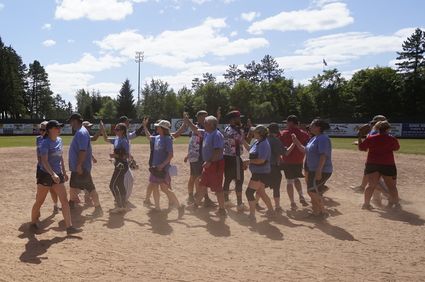 Tom LaVenture/Daily Globe Members of Team Ryan and The Ragone's shake hands following a game Saturday as part of the ninth annual Danny B Jack and Jill softball tournament in Gile, Wis. Team Ryan members are family, friends and Elk & Hound Restaurant coworkers of Ryan Alessandroni, who took his life at age 36 in January.

GILE, Wis. - It was perfect softball weather but organizers were playing with pain with the loss of Deloris Baross on the eve of Saturday's ninth annual Danny B Jack and Jill softball tournament.

Baross was the mother of Danny Baross, the 31-year-old Erwin Township man for whom the tournament was named by friends who wanted to remember him after his death by suicide in 2009. She died on Friday.

"Danny and my mom are watching from up above," said Lori Baross, a sister of Danny. "The only reason I'm here is because before she passed I promised that I would."

Deloris believed in the tournament...