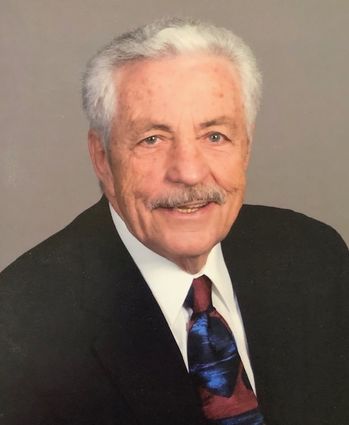 He was born on April 8, 1940 in Bessemer Township, Mich, the son of Secondo and Margaret (Bertorello) Pogliano. On Sept. 1, 1962 in Saxon, Wis., he married Margaret "Peggy" Jarvela and she survives.

Mike obtained his Bachelors Degree in Architecture from the University of Michigan. Mike was an instructor at Washtenaw Community College for over 33 years and an architect by trade designing residential homes, churches, and municipal buildings.

Mike was known for his charismatic personality, jokes and boisterous laugh, and it was not uncommon to see Mike walking in the Saline Community. Mike was a member of Kiwanis, helped prepare and serve dinners at the local American Legion, enjoyed golfing, fishing, spending time with friends and attending 4th of July Celebrations in his hometown in the Upper Peninsula.

Mike enjoyed traveling and he and Peggy visited Italy in Sept. 2018, enjoying all that Mike's ancestral roots could provide. Most of all, Mike enjoyed spending time with his family and being a "Papa" to his seven grandchildren.

In addition to his wife Peggy, survivors include; their children, Michael "Mike" Pogliano Jr., Mark (Michelle) Pogliano, Richard "Rick" (Missy) Pogliano and Janet (Paul) Reder; and grandkids, Bailey, Morgan and Lauryn Pogliano (Mark), Brennan and Jaret Pogliano (Rick) and Veronica and Michael Reder (Janet). He is also survived by one brother Chris (Candy) Pogliano and several cousins. Mike was preceded in death by his parents, aunts, and uncles.

A Mass of the Christian Burial will take place on Friday, Sept. 6, at 2 p.m.. at the St. Andrew Catholic Church in Saline with Fr. John Linden as Celebrant. Friends may join the family for a time of visitation on Thursday, Sept. 5, from 4 p.m. to 8 p.m. at the Robison-Bahnmiller Funeral Home in Saline. A Rosary Service will take place at 7 p.m. Visitation will also be held at the church on Friday from 1 p.m. until the time of service at 2 p.m. Burial will take place in the Hillcrest Cemetery in Bessemer, Mich. at a later date.

In lieu of flowers, memorial contributions may be made to the St. Andrew Catholic Church or to Washtenaw Community College. Envelopes will be available at the funeral home and the church. To leave a memory you have of Mike, to sign his guestbook, or for directions please visit rbfhsaline.com.