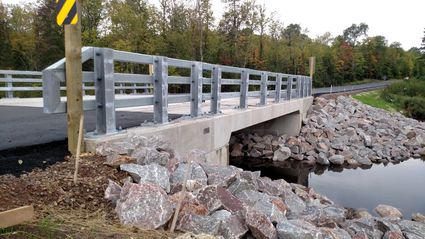 With work complete on the bridge, seen here Thursday, over the outlet of Long Lake, drivers can once again use County G through the town of Oma as the road reopened Thursday. The work wrapped up as the end of the construction season approaches, as evident by the early splashes of fall color seen in the trees surrounding the bridge.

OMA, Wis. - For the first time in close to two months drivers are able to use County G in Oma after the road reopened Thursday.

A section of the road had been closed since July 8 as a bridge was built where County G crosses the outlet of Long Lake, approximately 8 miles east of U.S. 51.

Although the road has reopened to traffic, Iron County Highway Commissioner Mike Swartz said Wednesday some shoulder and striping work will still be completed over the next few weeks.

The new bridge has an approximately 40-foot clear span and replaces two culverts which Swartz said were in very poor condition.

"The culverts were actually deficient to the point they were probably going to be weight restricted," Swartz said in July. "So this (project) was badly needed."

The installation of a bridge also expands recreational opportunities for lake users.

"With the bridge; now canoeists, kayakers, small boats will have access down the river, so that's a big plus," he added.

Although the final cost of the bridge isn't available yet, Janke General Contractors' low bid of $511,459 won the Athens, Wisconsin-based company the contract for the project.

Federal funds covered 80% of the bridge's cost, with the county paying for the remaining 20%.