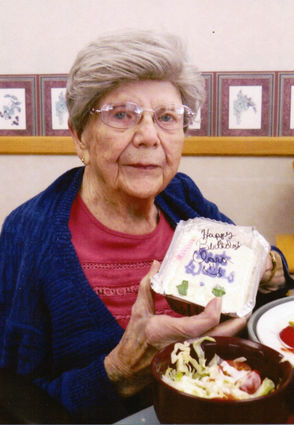 Clara was born on March 9, 1917, in Wakefield, a daughter of Herman and Helga (Erickson) Johnson. She attended Wakefield schools and graduated on June 6, 1934, as a member of the National Honor Society. After graduation she worked at the Wakefield Post Office for four years.

On Sept. 1, 1940, Clara married Wilfred Wiita of Wakefield at the Immanuel Lutheran Church. They celebrated their 50th wedding anniversary in 1990.

During World War II, the Wakefield High School offered night classes for drafting and welding for the war effort. Clara enrolled and had the opportunity to work at a shipyard in Everett, Wash., while visiting with her sister and brother-in-law, Vera and Clifford Pellerin in Everett. Later, she worked at a defense plant in Ypsilanti for a short time. After returning home, Clara concluded her working career as a receptionist and bookkeeper for Dr. J.R. Franck. She retired in 1979.

Clara was a faithful member of the Immanuel Lutheran Church where she served in several capacities. At All Saints Lutheran Church, she was active in the Joy Circle.

Clara loved to travel. In 1987, she traveled to Europe with her brother, Eugene and his wife, Janet. Clara visited with family relatives in Hallstahammer and Sundsvall, Sweden. On this trip, she also visited Germany. She and her husband enjoyed traveling to Hawaii as well as other United States destinations.

Clara is survived by three sons, David, Verle (Patricia) and Ralph (Kathy); seven grandchildren; and two great-grandchildren. Local survivors include a grand-niece, Janice Massie; a niece, Myra Warren; and her sister-in-law, Kay Wiita. Many nieces and nephews and two sisters-in-law reside in many places around the country.

A memorial service will be held Wednesday, Sept. 18, at 11 a.m., preceded by visitation at 10:30 a.m., at All Saints Lutheran Church, with the Rev. Bill Jacobson officiating.

A committal service and interment will take place at Lakeside Cemetery in Wakefield.

Luncheon will be served at the church fellowship hall upon return from the cemetery.

Expressions of affection in a charitable contribution in Clara's memory are suggested in lieu of flowers to All Saints Lutheran Church, 1202 Putnam St., Wakefield, MI 49968.

The family would like to express their deep appreciation to the caring staff at the Gogebic Medical Care Facility, who provided many kindnesses to Clara and her family.