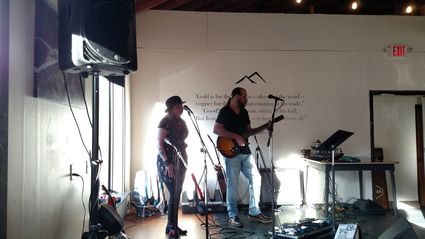 However, she said the co-op is much more than its physical space or its business operation.

"(The co-op) is a place where people feel welcome who might not feel welcome other places - (those with) alternative diets, alternative lifestyles," Powers said. "We know your name, we remember you, we know what you like."

"People come and they feel welcome," she added.

Although some people go through downtown without even realizing the co-op is there, Powers said there are also people who view it as a destination when visiting or moving to the community.

Sunday's event featured a taco bar and an array of desserts, raffles for various items and gift baskets, and music by A Single Pear.

Any funds raised Sunday will go toward the co-op's reserve fund, Powers said.

The co-op has operated in the black since it's "Save the Co-op" fundraiser two years ago, she explained, but the reserve fund has been depleted again by some unexpected expenses over the past two years.

"So we've maintained, but now we would like to get beyond (that)," she said.

After serving as president of the co-op board for four years, Powers said she is passing the baton at the organization's annual meeting Sept. 26.

"We are still looking for new board members to fill (some vacancies on the board)," Powers said.

Powers said those interested in joining or who want to get involved with the co-op just need to stop in the store and talk to one of the managers.