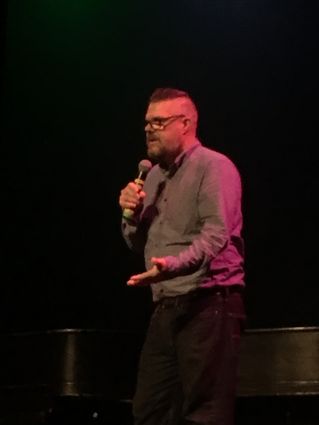 Ironwood - The Historic Ironwood Theatre was roaring with laughter Saturday night as comedian Tim Harmston took the stage. Harmston is a Minneapolis based comedian who travels the country doing shows.

But before he took the stage, the crowd was warmed up by opening act, Vivian Meradeth and Tim Mesun.

Meradeth and Mesun are both local performers who returned to Ironwood after seeking their degrees. Meradeth pursued her love of the stage at The American Academy of Dramatic Arts in Los Angeles and has returned back home for a time to perform for the crowds in her home town.

Mesun graduated with a degree in piano performance from Northern Michigan University and provided an upbeat organ performance prior to Harmston as the audience took their seats, as well as accompanying Meradeth on stage.

Meradeth and Mesun performed a variety of tunes for the audience encouraging them to be on their worst behavior and get dancing. Some of the tunes such as "Barbie Girl" encourages the audience to sing alongside the duo and have fun. After completing their set they were met by demands for an encore, for which they performed "What a wonderful world."

Having grown up in Wisconsin, quite a bit of his humor was pulled from topics local people know all too well, from stereotypes about Wisconsinites (beer and cheese, anyone?) to knowing nothing about pick-up truck culture. Throw in a few jokes about the intricacies of choosing anniversary gifts and some unexpected benefits of hunting dogs and the crowd loved it.

His show focused on daily life rather than major events or popular media, which reflected his on-stage personality. Harmston engaged the audience in his jokes, striking up conversations with the audience members and bouncing off of their ideas masterfully.

One of the main targets of his jokes was his marriage. He married another comedian (Mary Mack) seven years ago and the two of them have shared some fun and fond memories, as he expressed in his show.

Harmston explained during the show that he had known about Hurley and Ironwood due to traveling through them multiple times on his way to other shows, and was happy to have a chance to perform for the theatre. His hour-long act had the audience in fits of laughter and wanting more.

He ended the night extending a thanks to the people who keep the Historic Ironwood Theatre running, its many volunteers, performers and contributors.