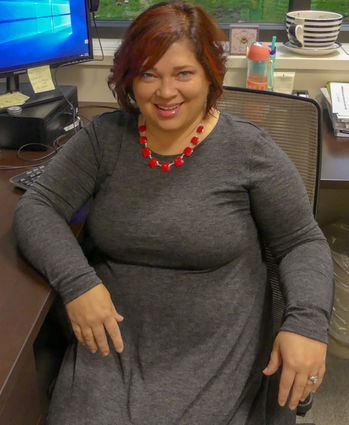 IRONWOOD - When cancer is confined only to the breast, 99% of patients survive for at least five more years, statistically.

Once the cancer enters the lymph nodes, the same survival rates drop to 85%, and if the cancer has metastasized to distant locations, the percentage plunges to 27%.

"So, that's why it's important for women to get their annual mammograms," said Heather Nyman, FNP-C, RN, MSN, regarding the numbers provided by cancer.net.

In addition, said Nyman, who is an oncology nurse practitioner at Aspirus Ironwood, some women may not be aware that they have a precancerous condition called atypical hyperplasia, which can be treated with medication once detected.

Nyman said various authorities on cancer advise women to get regular mammograms as of age 50 or 40 or even younger, depending on the patient's personal and familial history.

She added, however, that it's not always easy to inspire women to tend to their own health when they often prioritize the care of their families instead.

In particular, she said of mammograms, "I think younger women are less likely to get them, especially if there's no family history."

That's unfortunate, she explained, because only 5-10% of breast cancers are inherited, so she believes that when women do not have breast cancer in their families, it may "give them a false sense of security."

Moreover, she said, "Breast cancer, when it's found in women 40 or younger, tends to be very aggressive."

Nyman stressed that there is a lot of good news in relation to local treatment of breast cancer.

"The majority of breast cancer care can be done locally," she claimed. "I think it's pretty amazing for the size of our population."

She added, "Almost all of the chemos can be done here locally."

Also available here, said Nyman, are "the screening and diagnostic imagery, the blood work, and monitoring of the disease."

She noted, "The only thing we cannot do locally is radiation therapy, but not all women need that."

According to Nyman, new options in cancer treatment have emerged in just the past year. She said that positron emission tomography now is available locally on a weekly basis.

Also, in just the past six months, Nyman said Aspirus Ironwood has been able to offer 3D mammography.

"It's more sensitive, so it has the capacity to detect breast cancer earlier," she said, adding that one disadvantage may be that "it's so sensitive that people get called back for biopsies for things that are benign."

Nyman assured that the 3D service is a choice. "It's an option to use it," she said, adding that staff inform patients to check with their insurance companies before using 3D mammography because some companies may require a higher co-pay for the service.

Beyond offering what Nyman describes as "a viable cancer center," Aspirus Ironwood also provides a personal touch that she said may not be possible in larger facilities.

"The patients here become like family," she said. "You get that connection that you might not have in a bigger institution."

According to her, "People come in here and have coffee while they're waiting for their treatment. They develop relationships with other patients."

In relation to her own role, she said, "I have the luxury to spend more time with the patients. You get familiar with patients on a much deeper level here."

Nyman said of the staff, which is now led by oncologist Dr. Baochong Chang, "We're a very close group. These nurses are phenomenal. We have fun here."

That helps everyone, she said, because beating cancer is as much of a personal journey as a medical one.

It's important, she said, to "stay positive and active."

According to cancer.net, 41,760 women and 500 men are estimated to die from breast cancer this year in the United States. The same source states that breast cancer is the second most common cause of death from cancer in U.S. women.

It also points out, however, that since 1989, female deaths from breast cancer have steadily dropped "thanks to early detection and treatment improvements."