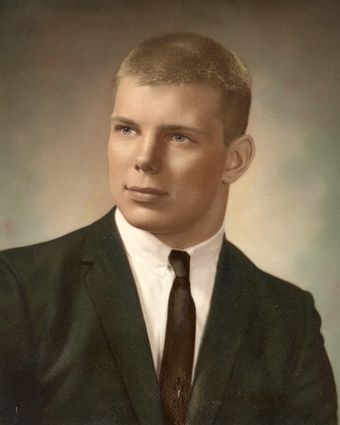 Mike was born on Oct. 18, 1950, in Wakefield, Mich., son of the late Michael and Darlene (Bierbrodt) Smolcich. Mike attended Wakefield High School where he excelled in several sports, earning many awards for basketball, track and field, baseball, and football including: 1966 M-W All-Conference Class C/D first team offense (tackle), 1967 M-W All-Conference Class C/D first team offense (tackle) and defense (linebacker), 1967 All-U.P. Class C/D first team offense (tackle), 1967 All-U.P. Lineman of the Year (only second recipient from Wakefield to receive this award since 1958), and 1967 All-State Class C second team. He was awarded nine letters in football, basketball and track at Wakefield High School. Graduating in 1968, Mike then attended the University of Wisconsin-Madison where he played football for the Wisconsin Badgers. He joined the Badgers in 1968, played offensive left tackle on the first team in 1970 and 1971, and was a Major "W" award winner.

After college, Mike and his father started their own electrical business, Mikelectric, in Wakefield. In 1984, Mike began working as a master electrician for Town & Country Electric in Appleton, and in 2000 he accepted a position as a project manager with Michels Power, where he worked until his retirement in 2016.

Mike married JoAnn Pavlovich on June 14, 1975. They were blessed with three children and four grandchildren with another on the way, and enjoyed 44 years of marriage.

Mike was a member of Sacred Heart Catholic Parish in Appleton. He was an avid outdoorsman and enjoyed fishing and spending time up north at his hunting camp. Mike was an animal lover and always had a special place in his heart for dogs, especially his yellow lab, Sammy. He was also a big Packer fan and enjoyed cheering on his favorite team each game day.

A Mass of Christian burial for Mike will be held on Friday, Oct. 4, at 11 a.m. at Sacred Heart Catholic Church at 222 E. Fremont St. in Appleton, with Fr. Joseph Dorner officiating. Visitation will be held at the church Friday morning beginning at 9 until 10:45 a.m. Burial will be at St. Joseph's Catholic Cemetery in Appleton.

The family would like to extend a special thank you to the wonderful staff at Cherry Meadows, who took such excellent care of Mike in his final days.