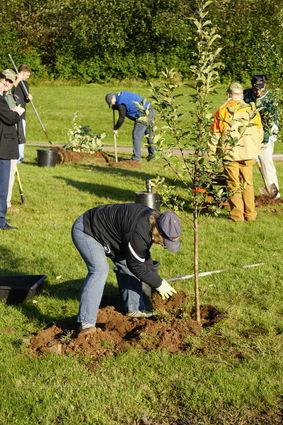 Gogebic Community College Board Trustee Susan Beals, center, packs down dirt around an apple tree on campus Tuesday, one of seven trees gifted from each of the seven board trustees. Other trustees pictured behind her include, from left, John Lupino, William Malloy, Eric Fitting and Tim Kolesar.

IRONWOOD - Johnny Appleseed made a stop at Gogebic Community College on Tuesday.

The Gogebic Community College Board of Trustees were on campus bright and early to plant seven apple trees inside the circular walkway just east of the Rutger Erickson Academic building and north of the parking lot near the Jacob Solin Center for business education.

"There are four varieties of apple tre...