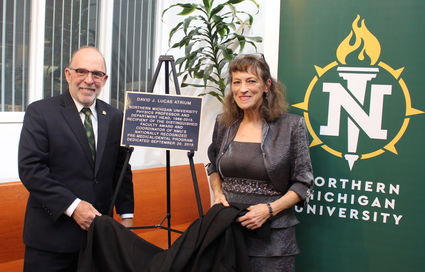 IRONWOOD - The late David J. Lucas, an Ironwood native, was honored by Northern Michigan University Sept. 20 by having the three-story atrium in the New Science Facility named after him. At the same time, another Upper Peninsula native from Kenton, the late Kathleen Shingler Weston, was honored by having the New Science Facility named after her. The designations are now the David J. Lucas Atrium within the Kathleen Shingler Weston Hall.

According to his wife, Marsha Lucas, in order to be considered a nominee for this distinction, three requirements...