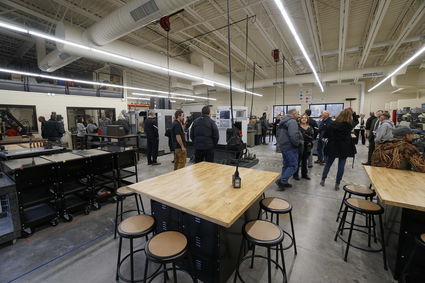 Several guests tour the Northwoods Manufacturing portion of Hurley school on Thursday, during an open house event to celebrate the $1.3 million expansion completed over the summer.

"By providing manufacturing education, we know some students will use the skills to complete projects at their future home while others go on to make it a career," Genisot said.

The school district goal is to ensure a curriculum that exposes students to careers that await them, he said. Manufacturing offers something that is needed even if it's not for everyone, he said.

Mackenzie Backman, a junior, plans to become an X-ray technician, but said learning woodworking helped her learn attention to detail and diligence.

"This teaches me to get things together and to do things the right way," Backman said.

She wanted to learn the fundamentals and then computer numerical control machines. She used her skills to make cutting boards for the 4-H auctions.

The wood shop was cramped before the expansion with people, machines and carts, she said.

"It was crazy, Backman said. "This is great."

Hurley Board of Education members, past and present were credited as the visionaries who recognized the need for manufacturing education. They were called good fiscal stewards of a general fund that budgeted a $1.3 million project without a referendum - with the help of private donations and a $100,000 boost from the Hurley Education Foundation.

"That simply doesn't happen much in the state," Genisot said.

Former district administrator Christopher Patritto said the school isn't afraid to try new things and was among the first with a laptop program. The school board is always breaking new ground, he said.

"The school board has a goal of doing what's best for the kids and the community," Patritto said. "They think outside the box and do things others aren't doing to get a step ahead."

Joseph Simonich, school board president, said there was a time when people commonly told graduates to leave Hurley if they wanted to succeed. Industries here today offer good paying jobs for people right out of school, he said.

"We can do almost anything here now," Simonich said of Northwoods Manufacturing. "We have to keep moving forward and we have to encourage our young people to stay and to make a living here and raise a family."

It's very seldom that a school district takes on a large project without a referendum, said State Rep. Beth Meyers, D-Bayfield. The school and the community came together to make this happen, she said.

"Wherever I go in the state of Wisconsin and I'm talking to schools or parents about how you engage students and young people into the trades, I always say, look up north at Northwoods," Meyers said. "What you have here truly is a gem and you should all be very proud of your accomplishment."

Hurley Mayor Paul Mullard said the equipment is very modern. The expansion will do a lot to help kids who might otherwise drop out of school to find direction, he said.

"I really appreciate this program," Mullard said. "My grandson went here as one of the first. He did a good job and got a scholarship to Appleton and now he works in plastics."

Fauerbach's late husband, Mike, left a legacy donation to the school when he passed away. She recalls seeing end tables and coffee tables the kids were making at a local furniture store.

"That closed the sale for me knowing the furniture was made by Hurley students," Fauerbach said. "I get to tell the story whenever people come to my house and admire the tables."

Hurley is ahead of the curve as other school districts are just now looking at how to prepare kids for the demands of area manufacturers, she said.

Tanner Nelson, a senior in the program, said the students make pens, wood bottle tops, cutting boards, tables and acrylic items. They also work on any idea people come up with to sell.

"We made two bars last year," he said. "One of the bars is in the Iron Nugget."

Zacharias, president of Extreme Tool & Engineering in Wakefield, made a matching donation so the school could purchase new plasma cutters. He said that when other machine tool and trade programs were shutting down, Hurley expanded its program aggressively. The program operates by core principals of quality and professionalism which are not easy, he said.

"It's one of the reasons Sheri and I continue to support Hurley along with other manufacturers," Zacharias said.

Rick Cunico, a project manager for Angelo Luppino Construction, the contractor for the expansion, said the seamless extension from the existing building wasn't easy.

"I'm proud of the way it turned out. It matches good," he said.

"Almost half of the school comes through," Peterson said.

The expansion will provide more room to work on projects without having to move them in and out of the building daily, they said.

"This will allow us to add a construction program and maybe modulars," Peterson said.

Hostettler said the expansion allows him to teach and observe at the same time. Until now he taught across the hall from the shop.

"I'm really excited about having my classroom out in the shop now," he said. "It's much more efficient this way."

The extra room means that students can again work on projects like trailers and ice shacks, he said. The shop may be the biggest in northern Wisconsin for a school this size, he said.

"It's pretty rare to have a 12,000 square foot shop with four CNC machines in a high school," Hostettler said.

The expansion is about giving students the tools to do some basic stuff and letting them explore, Peterson said. The students work on their own and in groups without supervision and know when to ask questions, he said.

"It's not always necessarily just the specific skills, it's also the work ethic," he said. "They come out of here working as a team."