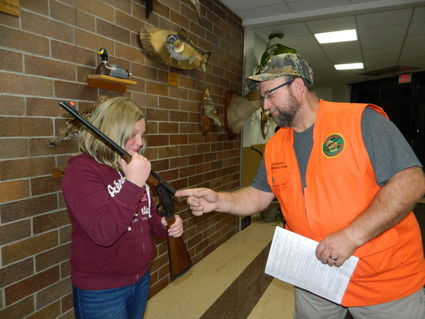 AMELIA NORDHAUGEN, 12, listens as safety instructor Bill Sivula shows where the cartridge is loaded into a rifle Thursday during the second class of the hunter's safety course in Hurley. The class focused on "hands on" instruction.

Hurley - After a review of what was learned in the first class, students in David Vuorenmaa's hunter's safety course were ready for a "hands on" session Thursday. Vuorenmaa teaches for the Wisconsin Department of Natural Resources in Iron County.

Throughout the night not only was safety the main priority, but responsibility, knowledge and involvement were highly emphasized as well.

Students learned how to pick up a rifle, how to load it with the correct type of ammunition, how to identify its parts and the six different types of carries - sling, trial, cradle, elbow, shoulder and two-handed. They learned how to safely handle a firearm not only when alone, but when hunting with a partner.

They discussed the four rules to follow such as always treating a gun as if it is loaded, always pointing it away from others, knowing your target and beyond and keeping your finger off the trigger.

Rifle firing techniques were covered such as breathing, trigger squeeze and follow-through. They learned the four firing positions starting with the steadiest to the least steadiest - prone, sitting, standing and kneeling.

Responsible hunting included preparing for the hunt by knowing the animal's characteristics and its environment and also knowing the local laws and shooting so as to cause the animal the least amount of suffering.

Hunting strategies were discussed such as still hunting, stalking, posting, ground blinds, stands driving, flushing and trapping. Crossing obstacles with and without a partner was practiced.

While students listened to one instructor and answered questions from the book, another group went with the other instructor in another area for field practice. Both a field test and written test have to be passed to receive a certificate.

The students seemed knowledgeable and took the class very seriously. The instructors promoted an atmosphere of respect, and students seemed to enjoy what they were learning.