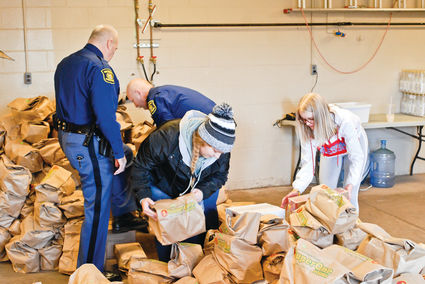 Wakefield - Gogebic County food pantries had the opportunity to stock their shelves in time for the holiday season Friday as the Michigan State Police's Wakefield Post distributed the food items the community has donated over the past several weeks.

Although the final donation totals are still being finalized, post officials said they received 22,275 pounds of donations from Gogebic County.

"We did good - I'm happy, the pantries are going to be happy," said Lt. Donald Horn, the post commander. "We had a very generous community again this year, without the community it wouldn't be successful."

The annual food drive is a partnership between the Michigan State Police, Michigan Department of Agriculture and Rural Development and the Food Bank Council of Michigan, according to information from organizers. Donations are collected around the state and distributed to local food pantries to help residents in need.

Sixteen percent of Michigan households struggle to put food on the table, according to Michigan Department of Agriculture and Rural Development Director Gary McDowell, and 21% of of children in the state don't know where their next meal will come from.

Although donations collected in Gogebic County were down from last year, Horn wasn't surprised.

"It's down a little bit, but that's expected with the prison being closed," Horn said.

He thanked the local businesses and community members for their continued generosity.

Along with MSP personnel, students from the Ironwood and Bessemer National Honor Societies volunteered Friday to distribute the food from the post's garage to food pantries in Ironwood, Bessemer and Watersmeet.

This is the 29th year the MSP has participated in the Michigan Harvest Gathering food drive campaign.