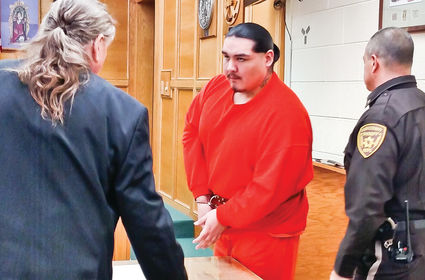 CURTIS WOLFE talks briefly with his attorney Frederick Bourg in Iron County Court Thursday after pleading no contest to four felonies related to the 2017 murder of Wayne Valliere.

HURLEY - Curtis A. Wolfe, 28, of Lac du Flambeau, appeared in Iron County Court Thursday and pleaded to his role in the 2017 murder of a Lac du Flambeau man.

"I have reviewed the criminal complaint in this case. I reviewed Mr. Wolfe's testimony in the Allen-Lussier trial that I previously...