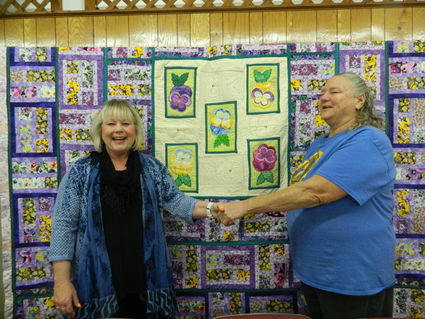 WILLA LAVAMAKI, left, of Superior, Wis. shakes hands with quilt-maker Sharlene Shaffer Friday in Ironwood at the Wesley United Methodist Church. Lavamaki was the winning bidder in a silent auction that sold the quilt for $700. The funds will go directly to help pay for a loan the church took out to repair its roof.

Ironwood - Thanks to the hard work of Sharlene Shaffer, president of the Northern Lights Quilting Guild, and organizers from the Ironwood Wesley United Church and the UMW (United Methodist Women), Willa Lavamaki of Superior, Wis. will go home Friday in pansy paradise and the church will have funds to help repay its roof renovation loan.

Pansy paradise is the name of the queen-sized quilt that was crafted by Shaffer and donated to the church to put in a silent auction to help raise money to repay the loan. It features pansies throughout, with the dominant color being purple. The quilt hung through three church events to get exposure: the salad supper in June, the pie social in July and the fall festival in October, before the winning bid was announced, said UMW president Marilyn Soyka.

Lavamaki paid $700 for the quilt that she said was bought in memory of her aunt, Marion Erickson, who was a life-long member of the church and also loved pansies. Erickson passed away this year at the age of 97 and was one of the last "Rosie the Riveters," Lavamaki said. (The Rosie the Riveter Association was founded to honor working women of WWII).

After seeing her aunt admire the quilt, Lavamaki said she was determined to win the highest bid and had relatives in Ironwood keep her abreast of the bids so she could outbid them.

When Shaffer heard about the church's roof and the funds needed to repair it, she said she just had to do something. "It's such a beautiful church," she said. It took her about 9 months to finish it, she said, adding that she likes pansies too because they often are the first flowers to pop up under the winter snow in the spring.

All proceeds from the auction will help pay for the church's loan. The roof repairs began in August of 2016 and was completed in September of 2018, said head church trustee Ronald Ahonen.