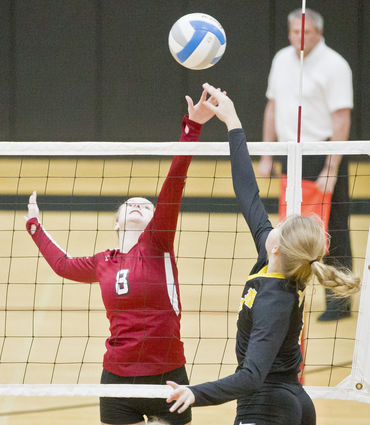 "It just goes to show a record doesn't tell you what kind of team you're coming up against," Iron Mountain coach Jeanne Newberry said. "They are kind of a Cinderella team right now."

They're a team that is playing well and finishing the matches they weren't winning in the regular season. It's a great week to play your best volleyball.

"It's like we're playing together as a team a little bit better this week," Ironwood coach Lisa Fechter said. "Perfect timing to be peaking and playing our best volleyball of the year."

The Red Devils came out strong and breezed to a 25-14 win in the first set.

"It was good to get that first win under us," Fechter said. It was especially good to win it the way they did. "That gave us a little more confidence because we hadn't seen this team before and we didn't know much about them."

Iron Mountain, though, took commanding 7-1 and 15-6 leads in the second set. Ironwood put together a serious comeback effort to pull within 16-15, but a tip by McKenna Smith off an Ironwood save started a run of eight straight Mountaineer points and an eventual 25-18 game two win.

"We went flat in the second game," Fechter said. "We pretty consistently have been doing that this year. We'll win one and go flat.

"But we bounced back right away."

They sure did, scoring the first five points of the third game and building a 14-4 lead. Iron Mountain didn't make as serious a run as Ironwood did in the previous game and Ironwood went on to win 25-15.

The fourth game was tied early, but Ironwood once again took control and built a five-point lead to double digits at 23-13. They won 25-16.

"At this point of the season, which is tournaments, you can never let a team get too far ahead of you, otherwise you're climbing all the time," Newberry said. "That's what happened in the first set and the last two sets, they got a jump on us in their serves."

It was a couple of Iron Mountain's servers who went on long runs in the second game and Ironwood put a stop to that in the ensuing sets.

"I really focused on that in the third and fourth games, saying, 'Hey, only let them get one or two serves at a time instead of letting them go on a long run,'" Fechter said. "And we did that. We executed well, we were attacking at them and keeping them out of system."

"(Osterholm) had a floater," Newberry said. "Talk about keeping our back row off balance on serves."

Annslee Runsat led the Mountaineers with 12 kills and McKenna Smith had 11. Anna Rittenhouse had four aces.

Now Ironwood will try to upset perennial Copper County power Calumet. The district final is tonight at 6 p.m. in Ironwood.

"Calumet is always one of the top teams up there," Fechter said. "It'd be exciting to steal it away from them. They've been the district champs for a long time.

"They're a strong team, they've got a lot of height," Newberry said.