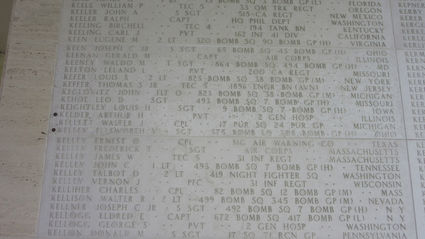 Walter J. Kellett's name appears on the Wall of the Missing in the Manila American Cemtery in the Philippines. Kellett was an Ironwood native who was a prisoner of war and who died in July of 1942. His remains were identified this year by DNA testing and he was laid to rest in Ironwood on Oct. 5 of this year.

An historian living in Virginia, Minn., Kwiecinski didn't know Kellett, but he knew his story well.

Kellett was forced to walk what's known as the Bataan Death March which was "65 miles of hell on Earth," Kwiecinski told the Daily Globe.

Kwiecinski has been leading a tour of the march every year since 2007. After reading of Kellett's funeral, Kwiecinski set out to find Kellett's name on the Wall of the Missing in...