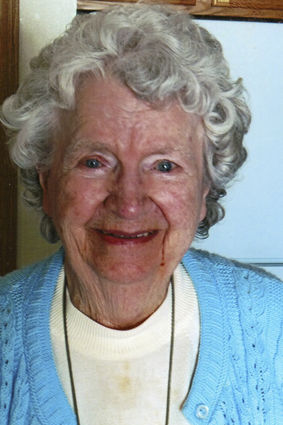 IRONWOOD, Mich. - Virginia E. "Betty" Peierl, 98, of Ironwood, formerly of Boulder Junction and Milwaukee, Wis., passed away peacefully early Friday morning, Nov. 8, 2019, at Westgate Nursing, Rehabilitation and Assisted Living Community in Ironwood, with her family at her side.

Betty was born on Sept. 12, 1921, in Dala-Husby, Sweden, a daughter of Karl-August and Sofia (Sundvall) Anderson. At the age of 18, she immigrated to New York on the last boat available because of World War II in October 1939. Betty went by train from New York to Milwaukee to live with relatives that had arrived to the United States years earlier.

Betty worked as a maid, then later at Omar Bakeries. When the war effort was hiring in industry, she hired in at AP Controls, a factory that made among other things small stoves for heating small tents for our troops. Betty worked at AP Controls for more than 41 years. She retired in 1983.

In 1951, Betty married Anthony "Tony" Peierl, who she met at the Dreamland Dance Hall in Milwaukee. They celebrated nearly 59 years of marriage until his passing on May 11, 2011.

In 2012, she moved to Boulder Junction and then to Ironwood to be close to family.

Betty loved to play bingo and could be found in attendance wherever it was being played.

She was an excellent cook and would bake Swedish vienerbrod to die for! Visiting Betty and Tony was truly a treat to remember.

Besides her beloved husband, she was predeceased by her parents; three sisters, Anna, Marta and Greta; two brothers, Ernest and Harold; and a nephew, Erik Anderson.

According to Betty's wishes, cremation will take place. She will be joining Tony at Arlington Park Cemetery in Milwaukee.

The family would like to extend their gratitude to the staff at Westgate Nursing, Rehabilitation and Assisted Living Community for their compassionate and professional care given to Betty, and the many kindnesses extended to the family.